With roots running deeply throughout our community, we take great pride in being a family-owned and operated law firm. We not only practice law here, but live and play here too. We’ve grown up here, raised our families, and coached our children’s little league teams here. We participate in civic and community organizations and enjoy the same restaurants, shops and annual events as you do. It is part of our abiding commitment to give back to the community that has given us so much.

Recognized year after year by both the Pennsylvania and Lackawanna Bar Associations for our pro bono work, Powell Law is proud to carry on our grandfather’s tradition of representing needy clients still today. For us, it isn’t just about being good lawyers. It’s about being good neighbors and friends.

Powell Law was founded by our grandfather, James J. Powell, Sr., who at age 13, as an orphan,went to work in the coal mines to help support his brothers and sisters. His perseverance led him to become a schoolteacher and later a principal. Studying nights, he became a lawyer and established our firm based on the principles of “honor, integrity and trust,” principles we cherish and strive to uphold every day.

James Powell’s son, the late Christopher T. Powell Sr., is regarded as the greatest civil and criminal trial lawyer in the history of Lackawanna County. A physically imposing man, Chris’ fierce advocacy, loyalty to his clients’ cause, and winning record in the courtroom struck fear in the hearts of his rivals. He and his brother, James J. Powell, Jr., founded Powell & Powell, the forerunner of today’s Powell Law. Christopher T. Powell Sr.’s sons, Christopher, Jr. and Mark, and James J. Powell, Jr.’s son, James III, are the third generation of Powell lawyers to practice in the firm. They are joined by Attorneys Bruce S. Zero and James F. Mundy.

In 1888, at the tender age of 13, James J. Powell, Sr. was orphaned when both of his parents were killed in a train wreck known as the Mud Run Disaster.

After working in a coal breaker to help support his family, James attended public school, graduating from East Stroudsburg State Teachers College and later working as a teacher and principal in Moosic. During this time, he studied law and was admitted to the Lackawanna County Bar in 1905. In December 1906 at age 30, he began practicing law with offices in the Mears Building.

A lifelong resident of the Minooka section of Scranton and a member of the Lackawanna Bar Association for nearly 40 years, Jim became known as one of the region’s outstanding lawyers. He married Mary M. Boland whose brother, Patrick, became a member of the U.S. House of Representatives. A devout communicant of St. Joseph’s Church, he was also active in Democratic politics for many years, serving as a campaign speaker for the Lackawanna County Democratic Committee.

While working as First Assistant District Attorney under District Attorney Michael J. Eagen, who became Chief Justice of Pennsylvania’s Supreme Court, Jim prosecuted many of the county’s major criminal cases. He also served for several years as regional counsel for the Reconstruction Finance Corporation. He gained prominence in the area’s labor community serving as the attorney for the Streetcar Men’s Union. He helped the union negotiate labor contracts with the Scranton Transit Co., which operated the city’s electric streetcars, and acted as the union’s legal adviser on wage and arbitration matters. He served for many years as solicitor to Lackawanna Township and its school district, and as chairman of the Pennsylvania Board of Law Examiners.

Although one of the busiest lawyers in the county, Jim devoted much of his time to civic and welfare activities.He was a longtime member of the Friendly Sons of St. Patrick of Lackawanna County and served as toastmaster at one of the organization’s annual dinners.

Born in the Minooka section of Scranton, James J. Powell, Jr. was the son of founder, Attorney James J. Powell, Sr., and his wife, Mary Boland Powell. He earned a bachelor’s degree from St. Thomas College, now the University of Scranton, and from 1935-1939, served as a clerk in the U.S. House of Representatives in Washington, D.C.. He earned his law degree from Georgetown University Law School and was admitted to the Lackawanna County Bar in 1940, becoming a junior partner in Powell, Eagen & Powell.

In February 1941, Jim enlisted as a private in the 109th Infantry Regiment and while in basic training, was commissioned an officer. Overseas during World War II, he participated in many engagements including the invasion of Normandy in June 1944 while serving with the 6th Engineers Special Brigade. He was awarded the Bronze Star medal for bravery; the Croix de Guerre “for exceptional war services rendered in the course of operations for the liberation of France” from then-General, and later President of France, Charles de Gaulle; and a Certificate of Appreciation from the people of Antwerp, Belgium, for his work as commanding officer of the 79th Port Company, 487 Port Battalion, in the Port of Antwerp during the 175 days of continuous enemy air and V-weapons bombardment between October 1944 and March 1945.
In April 1944, while serving as a captain, he married Joan Hopgood of South Wales who had been serving as a civilian hospital and ambulance worker. After serving nearly five years in the Army, of which 31 months were spent overseas, he was discharged in November 1946, reenlisting in the 109th Infantry Regiment when that unit was reorganized stateside. He commanded the same Company in which he had enlisted as a private in 1941.

During his short lifetime, Jim participated in many of the leading civic, fraternal and political affairs in Lackawanna County including as solicitor for Lackawanna Township and its school district, Moosic Borough, Moosic School District, and Spring Brook School District. He was a communicant of St. Joseph’s Church and a member of its Holy Name Society, and was a member of the Scranton Council, Knights of Columbus. He was active within dozens of other civic, fraternal and veteran organizations.

Jim’s father died while he was serving in Europe in 1944, and the family law firm was run by associates until he returned. Having developed health problems, Jim asked his younger brother, Christopher T. Powell Sr., to return home from his job as an attorney with the U.S. Department of Labor in Washington, D.C. and join the family practice. Chris was admitted to the Lackawanna County Bar in 1957, and together the brothers formed Powell & Powell, the forerunner of today’s Powell Law.

On March 20, 1959, after a busy day at the office, Jim died suddenly of a stroke at the age of 47. In a eulogy published by the Lackawanna Bar Association, his colleagues recalled, “He was a man of great generosity of heart and spirit. Not only was he greatly respected as a man of high standards in the community, but his simple dignity of life, his sense of duty to country, his charm and happy nature, his courage in war and peace, his example as a husband and father in his own family circle, revealed the solid distinguished aspects of his character.” 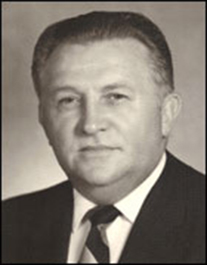 Attorney Christopher T. Powell Sr. was a legendary Lackawanna County trial lawyer known for his imposing presence, loyalty to his clients, and zealous advocacy in the courtroom.

Although he lived in Moosic for most of his adult life, Chris was born and raised in the Minooka section of Scranton, son of Attorney James J. Powell, Sr. and Mary Boland Powell. He earned a bachelor’s degree from St. Thomas College, now the University of Scranton, and spent more than three years overseas as a lieutenant in the Navy during World War II. Following his discharge, he attended Catholic University Law School where he earned his law degree in 1949.

Chris was the Assistant Regional Attorney for the U.S. Department of Labor for several years, returning home in 1957. With his brother, Attorney James J. Powell Jr., he formed Powell & Powell, the forerunner of today’s Powell Law. Chris practiced law with his nephew, James J. Powell III andson, Christopher T. Powell, Jr., . At the time of his death in 1990, he was the senior member of the law firm with offices on Scranton’s Barrister’s Row.

Active in the Lackawanna Bar Association, he was a member of the Board of Directors and its Executive Committee. He was also a member of the Pennsylvania andAmerican Bar Associations, as well as the Pennsylvania Trial Lawyers Association. He and his wife, Nan Walsh Powell, had four sons and a daughter. Two of their sons, Christopher T. Powell, Jr. and Mark J. Powell, are current partners in Powell Law and a third son,Attorney Thomas Powell, resides and practices law in Virginia.

After Chris’ passing, the Lackawanna Bar Association recalled, “Chris loved life in the proud tradition of native Minooka sons. The zeal that he exhibited on behalf of all of his clients and his presence on the second floor of the Lackawanna County Courthouse has been sadly missed since his untimely death. He was a wise friend to all members of the legal community.”

Mark J. Powell has taken a leave of absence from our firm to serve as the elected District Attorney for Lackawanna County. 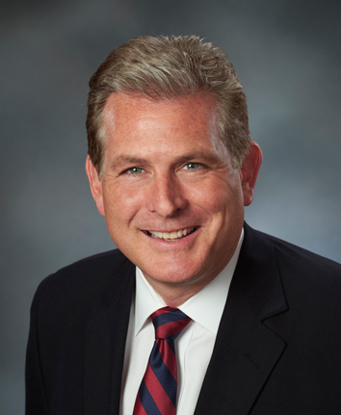 For more than 25 years, Mark Powell has been standing up for victims of wrongdoing and protecting the rights of his clients, following in the footsteps of his father, Christopher T. Powell, Sr. and grandfather, James Powell Sr. “Both my father and grandfather were trial lawyers in Lackawanna County and they were my heroes.”

“There’s a lot to know to be a great trial lawyer, but for me it’s all about helping people who are going through a tough time and need a lawyer to stand by their side. It’s about giving a voice to the voiceless while upholding our Constitution.”

After graduating from Riverside High School, Mark attended Villanova University where he earned his undergraduate degree and met his future wife, Donna. He went on to Catholic University in Washington, DC. After practicing several years, Mark returned to school and received a Masters of Laws and Trial Advocacy, an advanced academic degree from Temple University in Philadelphia. Mark is the only attorney in Northeastern Pennsylvania to hold a dual certification both as a Criminal Trial Specialist and Civil Trial Specialist from the National Board of Trial Advocacy and have his Masters of Laws degree. As a tireless advocate for victims, Mark received the Lawrence Roth Compassion for Victims award from the Northeast Pennsylvania Trial Lawyers, where he previously served as President.

Mark is a devoted community leader who is active in several civic organizations and his church. He is President of the Moosic Youth Center and a past President of the Moosic Lions Club where he has been a member for the past 25 years. Mark coached basketball in the community from Bitty Basketball to Assistant High School Varsity Coach. Mark received the Hero of Humanity Award from the Vikings Helping Vikings non-profit organization he helped establish that helps children afford higher education.