In Jim Powell’s life, history skipped a generation then repeated itself.

Just like his grandfather nearly 70 years before, at age 14, Jim found himself the man of the house when his father died at age 46. He went to work in the factories to help support his mother and four younger brothers.

The experience forever changed his outlook, left him with a lasting respect for blue-collar workers, and shaped the way he practices law.

“I know how the working man thinks, I know how the guy in the factory thinks, because I was one of them,” Jim says. “I think it made me a much better man because I understand people and I never think I’m better than anyone else.”

Jim was born in Wales, Great Britain, while his father, a decorated war hero, was serving in World War II. Before his father was discharged from the Army, Jim and his Scots-Welsh mother traveled back to the family homestead in Minooka built by his grandfather.

After spending an idyllic childhood in Minooka, Jim graduated from Central High School and earned his bachelor’s degree from the University of Scranton. He went on to earn his Juris Doctorate from Catholic University Law School in Washington, D.C. and in 1970, returned to Scranton to practice law with his uncle, Chris Powell. Like the two generations of Powell lawyers who came before him, he devotes a significant portion of his practice to pro bono work.

“The best part about being a lawyer is the satisfaction of representing the little guy against all odds and giving him a chance at justice,” Jim says.

He’s served as Chairman of the Disciplinary Board of the Pennsylvania Supreme Court, the arm of the Supreme Court that oversees and disciplines the 80,000 attorneys in the Commonwealth. In that capacity, he chaired the Disciplinary Review Board, managed five offices, and oversaw a staff of 29 prosecutors, 50 administrative personnel, investigators and others.

Apart from his practice, Jim is an avid big-game hunter. He Enjoys taking his children on hunting trips all over the world.  He says, “Now is the time for  my grandchildren.” He and his wife, Catherine, live in Springbrook Township and have three children, James Jr., Shawn, and Kelly. 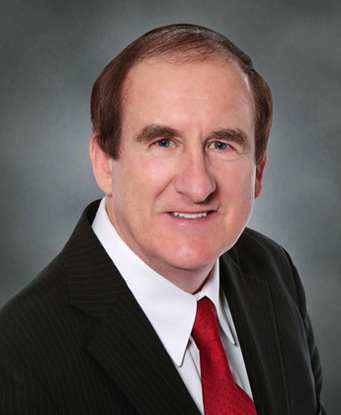