For 113 years, the attorneys at Powell Law have helped families receive compensation for personal injuries. Today, many families have the responsibility of caring for elderly members who may be chronically ill and require the temporary or permanent services of nursing or assisted-living homes. In the fall of 2017, the Health and Human Services’ Office of Inspector General released a report that suggests many cases of severe nursing home abuse remain unreported. Of even more importance is that the report suggests the realistic probability there are thousands of cases of severe nursing home abuse that are never reported.

According to the HHS report, in 2015, while 134 cases of physical or sexual abuse at nursing homes were sufficiently severe to require emergency care, 28 percent of these cases were initially unreported. These cases were investigated over time only because it was necessary for these patients to visit an emergency room. Thus, almost three in ten cases of abuse were never reported. A significant majority of these cases involved sexual assault.

Considering that state and federal law require that serious cases of abuse in nursing homes are turned over to law enforcement, this fact demonstrates the significance of the problem and the failure to adequately address it. The report seems to confirm what the public has known for decades about the problems entrusting the care of a loved one to a nursing home.

Thus, it is crucial that family members who have loved ones in nursing homes maintain an ongoing vigilance for signs of abuse or neglect. One case involved a patient whose sexual assault and resulting injuries were not reported to the police within two hours of discovery as mandated by federal law. The nursing home destroyed valuable evidence by cleaning up the victim after the crime, suggesting an effort to conceal the incident. Only after it notified the family the day after the assault was the incident reported to authorities. Of course, it was the family rather than the nursing home that eventually informed police of the crime.

While visiting a loved one in a nursing home, have you observed signs of abuse? If so, it is important to contact local law enforcement to investigate the matter. Later, an experienced personal injury attorney may help you recover damages for the nursing home’s failure to meet applicable standards imposed by law including its duty of care. Consult the experienced attorneys at Powell Law. Contact us online or call (570) 961-0777. You don’t pay unless we win. 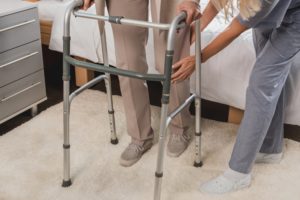